The Game Changing Power of Robotics and Social-Emotional Learning

Every day, about 100 people are diagnosed with Autism Spectrum Disorder (ASD) in the United States. Studies indicate that this costs the U.S. over $238 billion per year, with a projection of about $1 trillion annually by 2025.

While ASD does not have a known cure, children with the disorder have demonstrated significant improvement when receiving an early diagnosis and effective intervention. Research shows that children with ASD find robots incredibly engaging, and are more comfortable interacting with robots than they are with people.

After seeing the research supporting robots and autism, we saw the perfect opportunity to leverage this connection, and to fill a real need in the education industry. We recognized the lack of cohesive content curriculum to accompany robots. Our vision was to create a robot that could serve as a platform to deliver content to students with ASD. 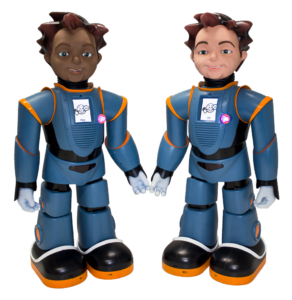 We spent years making the technical breakthroughs necessary to reach a price point that public schools could afford. The result wasMilo, our 2-foot-tall humanoid robot. He walks, talks (82% slower than normal speech), and models human facial expressions. With the corresponding Robots4Autism content course, students ages 5–17 with ASD learn a variety of skills, like tuning in on emotions, expressing empathy, and how to act appropriately in social situations.

Milo is the patient and understanding teacher children with ASD need. Since he is a robot, he never gets tired or impatient, and can repeat lessons as often as the student needs. Many students see Milo as their friend, in some cases he is the first friend they’d ever had. Children with ASD vary widely in intelligence and ability, and Milo is able to assist and engage with students who are on any part of the spectrum. His approach focuses on encouraging children to want to make progress, rather than imposing the behavior on them.

Children with ASD can have tantrums several times a day. This angry or frustrated behavior will typically stop once the child is removed from the classroom. With Milo, we’re seeing kids learning to calm themselves down on their own, without teacher intervention. Often times, those with ASD live inside their head. They spend a lot of time trying to block out outside interaction that they find overstimulating.

Many educators, when beginning their adoption of the Robots4Autism curriculum, start these students on the Calm Down module, which gives students the tools to deal with overstimulation in constructive ways. Currently, Milo is in nearly 400 schools, and we have seen emotional progress in 2–3 months that in some cases can take years to occur. It truly changes the entire classroom atmosphere.

At Robots4Autism, we’re not just selling robots. We’re offering schools and teachers an opportunity to reach children with ASD more effectively than they ever have before, and providing students with ASD a way to connect with the world around them.

Fred Margolin is the co-founder of RoboKind with a background in finance and insurance. His position centers around creating marketing strategies for the public to use and continuing to expand Milo’s impact on children with autism spectrum disorder.

Let us know your email to stay in the know! Some of our favorite topics include success stories, case studies, new grant opportunities, and product updates.

RoboKind is an education technology company that builds next generation assistive robots and curriculum for students of all capabilities.