A few years ago, the Blairsville-Saltsburg School District was looking for tools to help them deliver more systematic, comprehensive, and all-encompassing social skills instruction for students with autism spectrum disorders (ASD).

At the time, if a student caused a disruption in math class, for example, their teacher would let special education staff know and they would pull them out that day or later in the week for a session to talk about the situation. They would go over what the student had done and suggest different options for similar situations in the future. In trying to help those students improve their social skills in the school setting, the staff was going from moment to moment and reacting to student behaviors more than they wanted to.

When the Director of Special Education, Regina Geesey, suggested that the district explore adopting a robot to help deliver social and emotional learning, the staff was all ears. Now, nearly three years after they introduced Milo to their students, staff members say it’s hard to imagine life in the district without him. 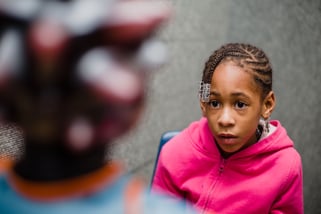 “With our younger students, we focus on building social skills in smaller groups and in one-on-one instruction, often involving Milo,” says Heather Kress, a speech language pathologist with the district. “Many of our students are working their way through Milo’s curriculum from beginning to end, while others may only work with him to address topics and skills they need particular help with.”

Informed by each student’s IEP goals, Kress says she introduces the topic, talks to her students about it, then runs one of Milo’s lessons, which they either discuss together and do some role-playing or dive straight into robots4autism’s practice modules, where students can answer questions. From there, they may do more role-playing, offer praise, or use some visuals to reinforce the concepts.

In the higher grades, the district has incorporated Milo into life-skills instruction. With this group of students, who are mostly in middle school with some high school students, they focus on whole-group instruction. “We begin with group discussions, then we do some role-playing with the whole group and have students take on different roles for greetings and leavetaking, for example,” says Kress. “We’ll practice the directions that Milo gives, such as ‘look, turn, offer a greeting,’ or ‘look, smile, and say hi.’”

“We also pull social scripts in and make videos as part of the process with our older students, which has been really fun,” adds Kress. “After wrapping up greetings and leave-taking, for example, we started working on various social scripts where students have to interact with each other to invite a friend over to their house. We use the tools and ideas that Milo gave them, and then apply them to situations relevant to their lives, whether real or fabricated for therapy.”

District middle school students have embraced Milo as a tool, and their social skills acquisition has taken off since adopting him, according to staff. Students really enjoy the lessons, and are very in tune whenever he’s speaking.

“We’re seeing significant improvements every day with generalizing of targeted behaviors,” Kress says. “For example, our students are regularly greeting us now, with much better eye contact than before. They’re also having more reciprocal conversations, and seeing that kind of transference of skills to human-to-human interaction is really exciting.”

Kress points to one student in particular who has been using Milo’s strategies outside of lessons. Milo teaches tactics such as seeking to destress by counting to 10 or using other strategies when they’re frustrated or find a situation stressful. After having gone through those lessons, Kress said she’s seen this student actually use those in the classroom without any prompting.

“Milo and these skills we’re working on with him fulfill such an important part of what we understand success to be for these students, and not only in school, but also in their personal lives,” says Kress. “It is incredibly important to us to prepare our students for life after school, so we focus on career readiness. The primary goals of many of our students are to work independently and be able to communicate with others, problem-solve situations, deal with uncertainty, be a team player, and just generally be ready to interact in any situation that is not concrete.”

Milo fits into that larger goal of independence by helping students work through that curriculum and develop those skills. Their social skills need to go far deeper than simply talking to someone about how their day is going, and the whole program helps them dig into the depth of that.

“Before adopting Milo, we didn’t have a structured or systematic approach,” says Kress. “These days, with Milo and his supporting curriculum on the team, we’re following a systematic sequence of instruction. Our approach is much more proactive than previously, and it’s been amazing how well the students take to the technology. They’re always interested and excited to work with Milo, even the older students.”