Students with ASD Meet IEP Goals Through Team-Building and Consistency

Providing the necessary support for students with autism spectrum disorder (ASD) can be a challenge in the most forgiving of circumstances. The biggest challenge that Trillium Lakelands District School Board in Ontario faces is sheer size. The district serves 16,000 students in 54 schools, including 41 elementary schools, and is spread out across more than 4,400 square miles.

Thirty-seven (37) students with ASD from ten (10) different campuses throughout the school system worked with two (2) teachers to facilitate the robots4autism pilot program. Educators at each site were used for observational data collection through school board developed “generalization data collection” forms. This data was used to measure progress and document outcomes through tracking instances of targeted behaviors being generalized at any location in school.

Maintaining consistency of support across such a large area is a tall order, but Trillium succeeds with a committed team that includes principals, classroom educators, two traveling teachers, and a friendly little robot named Milo.

Spreading the Knowledge Consistently
To help students with ASD meet the goals laid out in their individualized education programs (IEPs), school board leadership assigned two teachers of autism and behavior to travel around the district to support the students with ASD at 10 campuses. Having Barry Hicks and Kristi Henshall focused on this task was a good start, but the team was looking for something that would help them maintain a unified approach.

“We were definitely implementing IEP programming, however we were really looking for a program that could tie together the social skills aspect and even social communication pieces,” said Jennifer Johnston, the district principal of learning at Trillium. “Until we implemented Milo and the robots4autism curriculum we really were piecing together individual programs, which is fine, but we were looking for a tool to draw upon, to be more specific in that planning.”

Hicks echoed that sentiment, explaining, “We were teaching social skills and various calming strategies, but it was quite varied. I was working more with red zone—those in need of greater support— students than I was supporting social skills, to be honest.”

Larry Hope, director of education at Trillium, had been introduced to Robots4Autism at an Education Research and Development Institute conference. He said the conversations he had there about how barriers to understanding social and emotional contexts can slow or stop children with ASD from developing communication skills and behaviors really stood out to him.

He took it back to the board, and they decided to take a chance on Milo, a two-foot tall robot with an expressive face and a social emotional curriculum, all designed to engage students with ASD and help them transfer social skills to human-to-human interaction.

Is a Robot the Right Tool to Teach Emotional Skills?
Johnston did have some misgivings at first, asking herself, “Why would we use a non-human to teach very human elements, the emotions, and connecting with people?” But her desire for consistent implementation won out, she said. “Every time you turn on Milo he repeats the lessons in the same tone of voice and is very consistent, so that piece drew me in.”

As more students were exposed to the robots4autism curriculum, Johnston found more to love. “What we love about Milo is not only was he providing us with goals to work towards for social skills and communication, but also it was incorporating ABA principles and supporting our staff to really understand how to use data and explicit instruction to move a student’s learning forward,” she said.

Henshall, the traveling teacher, embraced Milo from the get-go. “I loved the robot,” she said. “Why not teach with a robot? That’s super cool. But it did take some work in terms of getting the school teams to realize that the program was more than a robot. The program is really about social skills intervention, and Milo is one tool.”

Taking into account those somewhat mixed reactions to the idea of using a robot to help students understand emotions and connect with people, the team was very intentional as they introduced Milo. “We were very careful to make sure that people understood that Milo is not the teacher, Milo is the tool that further facilitates teaching and learning,” said Johnston. “Milo is the curriculum and we do have trained special education teachers who are the facilitators of that learning. That piece really supported schools in the knowledge that there is—just as with any other tool, curriculum, or program that you would use—strategic planning going into this implementation and initiative.”

“When they’re using milo I’m next to them,” explained Hicks. “We go through the lessons with milo and then we have various generalization activities that I use one on one with the student. They last about 15 minutes. I made up some templates, for example, that we use with Play-Doh and the students create the various facial expressions with the clay and then we discuss how we would know that that person is feeling happy or sad or angry.”

Expanding the Teams
Because there were only two teachers using Milo, there was little worry about consistency in how they themselves would use it. In a district where 98% of students with ASD are in mainstream classes, though, Trillium’s leaders wanted to extend that consistency beyond the itinerant teachers to the wider community at the schools they were working in.

“Every time we went into a new school with Milo, it started with a conversation with the team,” Johnston explained. “That would include the principal if available, the special education resource teacher, the classroom teacher, and maybe education assistants who might be working with that student.” Each school took a team approach to selecting the right students to work with Milo and then setting the goals appropriate for each student, she said, “and then Kristi and Barry would get into the teaching part of it.” 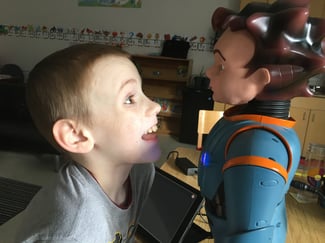 Connecting with the Right Students (and Parents)
Finding the students who would benefit most from working with Milo was not as easy as simply listing all the students with ASD. If there were, for example, nine students with autism at a school, the team might narrow the list down to four or five students who needed extra support in the areas of self-regulation, understanding emotions, or improving social skills. Now, when a student who could benefit the most from working with Milo is identified, a member of the local school talks it over with the student’s parents first.

“Usually the school principal, who knows that family best, opens a conversation about how Milo is a tool we could use to support IEP programming for social skills with your student,” said Henshall, noting that the school board created an informed consent form for parents since Milo collects data about their student’s progress.

Opening that door with parents is about more than just getting informed consent, however. Just as meeting with the principal and other educators at the individual schools helps to ensure consistency and extend the work students do with Milo beyond their sessions with him, bringing parents on board helps the learning extend beyond the school day.

“We also share all the support materials from the robots4autism website and send them home so families have copies of the visuals and copies of the goals so that we’re all doing the same work consistently to support those families and those students,” said Henshall. Johnston recalled, “We had one particular student who would take home the materials, and he drew himself a little Milo at home…he had a little Milo corner where he would self-select to practice his strategies with a paper Milo.”

A Vibrant, Ongoing Collaboration
Once the appropriate students are selected and their support network of classroom teachers and parents is in place, Henshall works with the school team to decide what to focus on with the student. They generally choose either emotional regulation or social communication, but, Henshall explained, "We do use the calm down module with all students regardless of which kind of path we want to take. I just feel like that’s great learning for both the school team and those students. So that’s a non-negotiable with everybody.”

Henshall also looks for commitments from her teaching colleagues. As the facilitator, she works with the students and Milo, but she also asks classroom teachers to do 10-15 minutes of daily practice with the Milo skills in the classroom, “because we really want to support that generalization for students,” she said. She uses extension activities from the robots4autism curriculum to give the classroom teams a base of ideas.

In return, Henshall asks classroom teachers to collect what she calls “generalization data.” Simply put, “Any time those educators in the classroom see the student generalizing the Milo skills, I ask them to write it down for me,” Henshall said. “It’s not overly scientific, but it gives us an indicator of what skills the students are generalizing and those where they need us to go back and do additional work.”

According to Johnston, this sort of collaboration is essential. “Milo works better when we adopt a team approach. That full engagement of the team in an ongoing way has led to a lot of growth. And most people are pretty intrigued by Milo, so the uptake has been good.”

Henshall agreed. “Teachers are really engaged and excited, but they have lots going on besides my interventions with students, so I also try to be available.” She walks around the school to supporting students—and their teachers. “That’s often the time a teacher will say to me, ‘What am I supposed to be doing again? Is this what you’re looking for?’ You have to make sure there’s open communication, because I’ve found that if I overwhelm people with paper they aren’t going to read it.”

In the end, Hicks said, “All that work to get the whole team pulling in the same direction pays off”. For example, he remembered working with one student on conversation dynamics. He would check in with her teacher to see if she had begun speaking up in class. The answer was always no. But she would speak to Hicks during their Milo sessions—in part, he said, because she felt more comfortable with Milo around.

In one of their sessions, Hicks asked the student about talking in class. She said she felt she couldn’t speak up in a particular class because there were challenging students in that class who “got in trouble” for talking too much. Hicks told her teacher that she was trying to follow instructions in class, and felt that speaking out was the wrong thing to do.

Once she was clear on the rules, “She started sharing every morning! They’d do a circle and that student would begin to share with her peers after she understood, from information coming from Milo, that it was appropriate,” Hicks continued. “She generalized what she was learning with Milo to the classroom. Interactions like that are beyond the curriculum, but they’re still very important and helpful for the student.”