According to Adell Valasek, the supervisor of education at Burlington County Special Services School District (BCSSSD), in her district, “academics come second.”

That may seem an odd thing for an educator to say, but BCSSSD, where Valasek oversees autism education for students aged 3–21, is a receiving district for students who need additional supports and services to be successful in the educational environment. All of the students in the district have individualized education plans (IEPs) reflective of their disability. “While academics are very important here,” Valasek clarifies our mission and purpose supports, “the foundation of every classroom in our district is built first upon communication and social skills.”

Background
Given their students’ unique needs and challenges, educators in BCSSSD focus throughout students’ academic careers on functional living skills such as flexibility, perseverance, and being able to handle unexpected changes or interruptions to schedules.

Those types of skills are built in throughout the school day, because, Valasek says, “Our students may have the academic or task ability for many jobs, but what's even more important is the ability to interact and communicate with others effectively in a social environment.”

Changes in routine, such as interacting with a different supervisor because their regular supervisor called in sick, may trigger behaviors in these students, so Burlington strategically and gradually exposes students to different situations and work-related challenges over time. “Having many people provide them exposure helps desensitize them and develops essential core skills that make their quality of life so much better when they leave,” says Valasek. 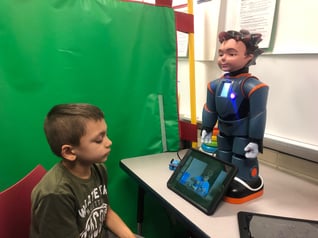 BCSSD adopted Milo after meeting RoboKind COO Dr. Gregory Firn at a taping of DisruptED TV last spring. Superintendent Dr. Christopher Nagy made the connection having been on the show prior. Dr. Nagy worked with Dr. Firn and his team to secure a robot for BCSSSD. In 2018, they began piloting the facially expressive humanoid robot and his social-emotional curriculum during the summer semester of the district’s extended school year. Teachers used Milo in two classes, one with students in grades K–2, and the other with students in grades 6–8.

Dr. Nagy needed supervision of the project and chose Valasek to be part of the process. She identified these two classrooms because they have students with a wide range of abilities, including students with limited skills in communication dynamics and students who have high verbal abilities, but are unable to make eye contact. This also included students who might have challenges related to behavior or regulating their emotions. “We thought it was a good representative sample that included students we strongly believed would benefit from interacting with Milo,” she says, “along with some we were less sure about.”

The response from students, according to Valasek, has been “amazing.” She recalls, “When we started Milo’s welcome module in front of one of those students we were less sure would benefit from him, she was hesitant at first and stood seven to 10 feet away. But after some time, she started getting closer and closer. Then her face just lit up as Milo was modelling some of the basic foundational skills we work on. Her teacher and I said to each other, ‘Oh, look at her! She's actually interested!’”

Other students who educators didn’t think would respond to Milo immediately emulated his actions or speech. Generalizing is a foundation of Milo’s social skills curriculum, which proceeds systematically from basic to higher-level or more complex skills.

Each student sees Milo three times a week for 30 minutes at a time, which is what the curriculum recommends. They’re also working on the same skills in other contexts, with other tools, and more directly with peers and teachers. Milo works as a supplement to the district’s regular instruction while also injecting increased student engagement, intrinsic motivation, and enthusiasm.

Students of all ages are engaged because the instruction comes from a robot instead of an adult. Kids who work with Milo still need to generalize those skills back into the natural environment, but Valasek says that's what the programs at BCSSSD does with all skills, so “it couldn’t have been a more perfect start.”

A Data-Driven Journey to Develop Social Skills
“All of our programs are data-based,” Valasek says, “so Milo fits right in as one more tool to help us track students’ skill-acquisition rate.” Milo has two iPads that go along with him, which allow students to interact with him and respond to questions and images. The data from those responses is collected on a teacher’s iPad, and is then automatically inputted and graphed so educators can analyze and decide to move on to the next lesson—or not.

So far, Valasek explains, “We've seen some great success with him. Certainly, some students are moving slower than others, but they are definitely taking an interest in him, and that provides a bridge to help students generalize and transfer the social skills they’re working on to human-to-human interactions.”

Milo has proven to be a powerful tool to help Burlington students prepare for their futures. “Someday, these kids are going to be adults integrated into our community with opportunities to be helpful to those around them, and might even have brilliant ideas about how to solve intractable problems,” Valasek concludes. Because of the skills they’re learning with Milo, “despite some of the idiosyncratic social behavior they’ve worked so hard to overcome, they’re going to be better equipped to take advantage of those opportunities.”