The newest instructor at Tom C. Gooch Elementary is unlike any others there.

Milo, who started at the northwest Dallas school a month ago, looks like his fellow co-workers and some of his students in many ways. He sports a spiky brown hairstyle, smiles when he’s happy, frowns when he’s sad, and asks students about their interests.

But he’s also less than 2 feet tall, possesses blue arms and legs, and has a small screen in the middle of his chest. That’s because Milo, a doll-like robot, was designed to help young students with autism learn new vocabulary, calming techniques and other coping skills.

“He’s a very non-threatening way for kids to learn better social and emotional skills,” said Soraya Gollop, community liaison for Gooch Elementary. “A key way to allow our students with autism to be within the general population and be part of the classroom, which is best for their academic achievement, is to teach them those coping skills. That’s when Milo comes in.”

An instructor sits next to him during a student’s lesson and controls the robot with an iPad. The student also has an iPad used to respond to Milo’s questions and watch videos with examples of one-sided conversations, facial expressions and other skills.

“Normally, I have my note-taking pad when I’m doing a lesson,” special education teacher Karol Henderson said. “If they get an answer incorrect, I’m writing down notes. It’s letting me prepare a lesson one-on-one with them or with a group of students. So when they come back to Milo the next time, they will eventually start mastering it.” 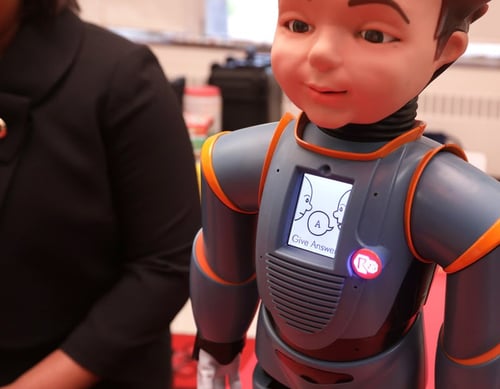 Gooch principal Kim Ashmore said Milo has helped the school make the most of its special education resources.

Ashmore said that the school has 31 students who are on the autism spectrum. About 18 percent of the school’s population is enrolled in special education classes, and the school’s special-needs population continues to grow.

In addition to using Milo, Gooch has taken other steps in recent years to make its students who have special needs feel more comfortable in their classrooms. The school has softened its fluorescent lights with panels, has added different scents throughout the school, and has placed in every classroom a sensory bucket that has items of varied textures that students can use to calm themselves when feeling overwhelmed. 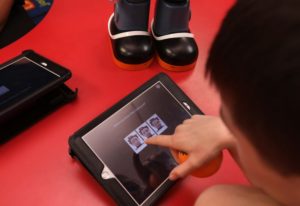 All of this has made the school attractive to many parents who have children with autism and other special needs, Ashmore said.

“Karol has a large caseload of 28 students and just her,” she said. “So we also train teacher assistants how to work with Milo, so we can utilize him other times of the day when Karol is not available.”

Even though Milo has been at Gooch for only a short time, Henderson said she’s already seeing results from students’ lessons with him.

“I’ve seen students go from one- to two-word responses to full sentences,” she said. “Students are now expressing their concerns with me vs. me trying to figure out what’s wrong if they are having a meltdown.”

One of these students is 7-year-old Maxwell Cowles.

On Wednesday, Maxwell sat down in front of Milo and quietly answered questions about his favorite food, teacher and class. Maxwell’s willingness to respond and make eye contact was a big win, Henderson said.

The first-grader also was able to show Milo some of his dance moves, an exercise covered by the robot.

“You like this part, don’t you?” Ashmore said as Maxwell smiled and swayed back and forth. 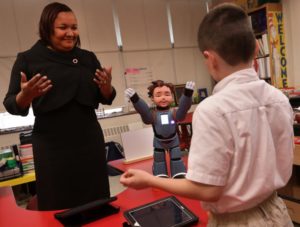 Richard Margolin, founder of Dallas-based RoboKind, which makes the robot, said the company decided to donate the robot and its curriculum after hearing about Gooch’s work with its special education population. The robot costs about $10,000 the first year and $3,250 every year after that for updated lessons.

“We saw the opportunity to do some real good and actually help people, Margolin said. “This is a population that needs a lot of help, and if you can give them that help, then these kids can really excel in other parts of their life.”

Margolin said Milo has is being used in about 300 schools across the U.S., including campuses in Arlington, Lewisville and Ennis. He said he hopes to see more Milos in Dallas within the next few years.

“Dallas is our home, so we would like to help as many kids as humanly possible,” he said.

By: Rick Wagner KINGSPORT — Washington Elementary School has someone new on staff this school year named Milo, and he’s a friend of 9-year-old student Will Russell, who was diagnosed with autism at age 4. Milo helps autistic students learn… END_OF_DOCUMENT_TOKEN_TO_BE_REPLACED

By: Miranda Parnell DALLAS – There’s a new kid at Tom Gooch Elementary, and he’s here to have some fun! “Milo, our robot, was actually gifted to us by RoboKind,” said principal Kim Ashmore. “It truly is designed specifically for the students with… END_OF_DOCUMENT_TOKEN_TO_BE_REPLACED

CUTTING EDGE CURRICULUM COULD BE COMING TO CMS

Cutting edge curriculum could be coming to CMS END_OF_DOCUMENT_TOKEN_TO_BE_REPLACED

BRINGING THE 5 CS INTO YOUR CLASSROOM

Bringing the 5 Cs into your classroom END_OF_DOCUMENT_TOKEN_TO_BE_REPLACED

HOW A HUMANOID ROBOT ENHANCES SEL SKILLS FOR STUDENTS WITH AUTISM

A special education teachers shares her best practices for connecting with challenging students and helping them develop the social skills they need. By: Shannon Darst You often hear people say, “You have to be a special kind of person to work… END_OF_DOCUMENT_TOKEN_TO_BE_REPLACED

By: Pedro Perez IV EDINBURG – Standing on the table where decisions at Edinburg CISD are made, Milo, introduced itself to members of the media using hand gestures and different facial recognitions. With ease, Milo explained how its purpose is to… END_OF_DOCUMENT_TOKEN_TO_BE_REPLACED

By: Amy Martinez EDINBURG, Texas – A new tool helping students with autism engage in a new educational adventure. Six campuses across Edinburg CISD will soon be equipped with MILO. It is a facial expressive social robot. MILO can move, dance and… END_OF_DOCUMENT_TOKEN_TO_BE_REPLACED
Page 5 of 19
«
3 4 5 6 7
»
Last »

Sign up for our newsletter to keep up with all things Robokind.