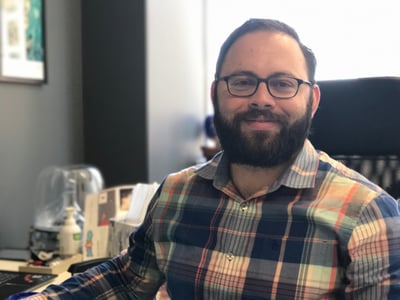 Richard Margolin is the Chief Technology Officer and Founder of RoboKind. He attended Trinity College in Hartford Connecticut, and the University of Texas at Arlington. He is no stranger to startups, having started many different companies before RoboKind.

“Everything I’ve ever been interested in as a hobby or a little artistic venture became a company.”

Richard was involved with several different projects over the years. Just to name a few, he helped develop purification methods for carbon nanotubes, worked in genetics on the Human Genome Project at the UT Southwestern Bioinformatics Lab, and has worked as the Engineering Director at Hanson Robotics.

Why did he start RoboKind?

“I saw a lot of research at the university level that showed that robots could be really good in autism and education generally.”

Richard has worked as the Engineering Director at a world-renowned humanoid robotics company where he came across studies that suggested robots could engage children with autism spectrum disorder (ASD) to help develop essential social skills, which is often difficult for children with ASD to understand. However, these studies were not going anywhere beyond the white pages of research notes. Expensive robots were used in various case studies,but weren’t practical for school or home environments. This gap left a space that RoboKind filled with Milo. Richard and his team’s first task was to develop a cost effective yet durable product that could be utilized in schools. Their second task was to work with experts in autism to create a curriculum using proven therapy methods that could help ASD learners develop social awareness.

Children with ASD are often considered to be lost causes due to their difficulties learning and understanding social behavior. They are often non-verbal and have meltdowns or temper tantrums when their brains receive too much information to process. RoboKind identified these issues and looked for the best methods to help ASD learners develop the life skills needed to function in society. Early iterations of Milo’s lessons showed tremendous results with their first students. One particular moment stood out for Richard.

He recalled a boy named Cole, who had been diagnosed with autism at the age of 4 and been in traditional therapy for nearly a decade. “He was non-verbal. He didn’t look at people. He didn’t communicate. He kind of was compliant in therapy sessions but not engaged. If you asked him to do something, he would do it, but that was kind of the end of it. He wouldn’t acknowledge you.” Then Cole met Milo, and he spoke for the first time. Within a few weeks, Cole was talking to his family and practicing greetings on his own. Richard knew then that Milo could open doors for ASD learners.

Richard’s plans for the future:

Sign up for our newsletter to keep up with all things Robokind.